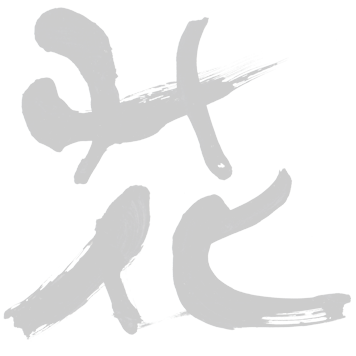 * Business hours may change due to the spread of new coronavirus infection.
For the latest information, please visit our official website, official SNS (Facebook / Instagram),
We will inform you at any time by posting in writing at the store. 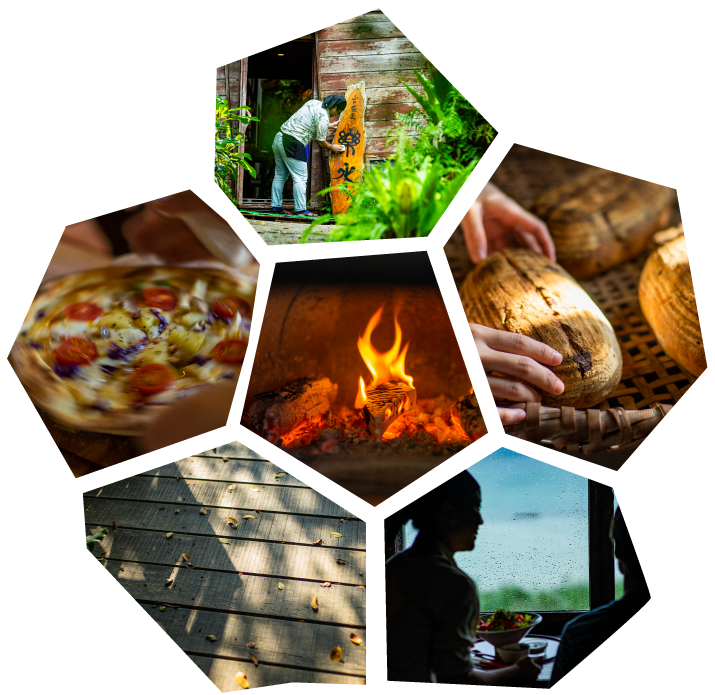 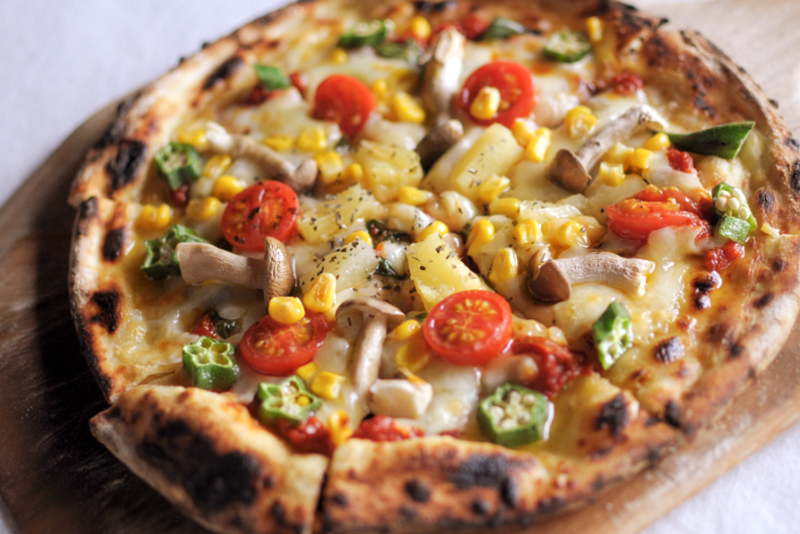 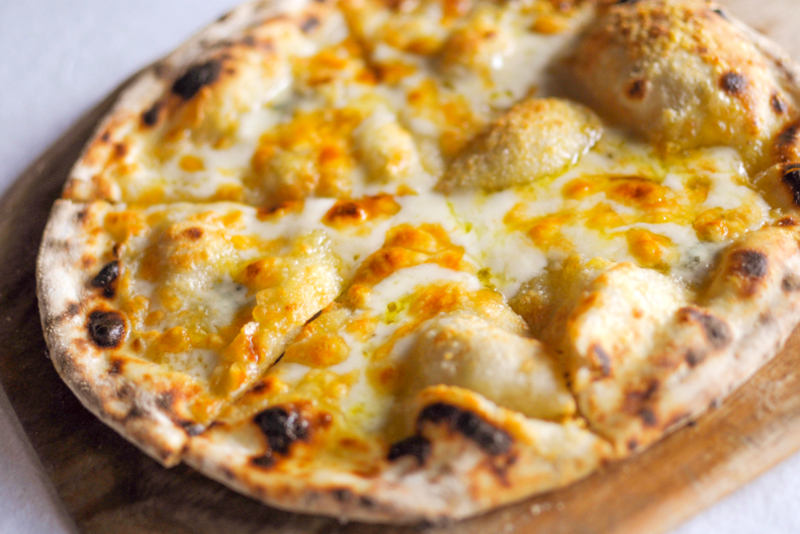 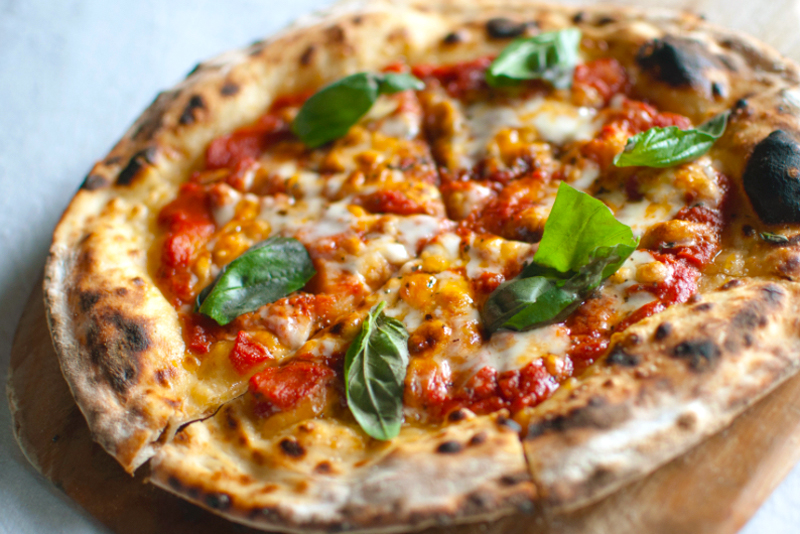 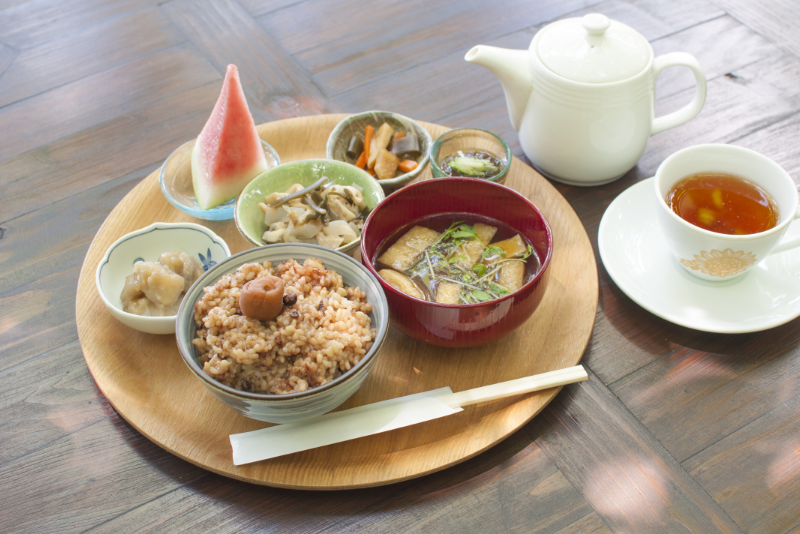 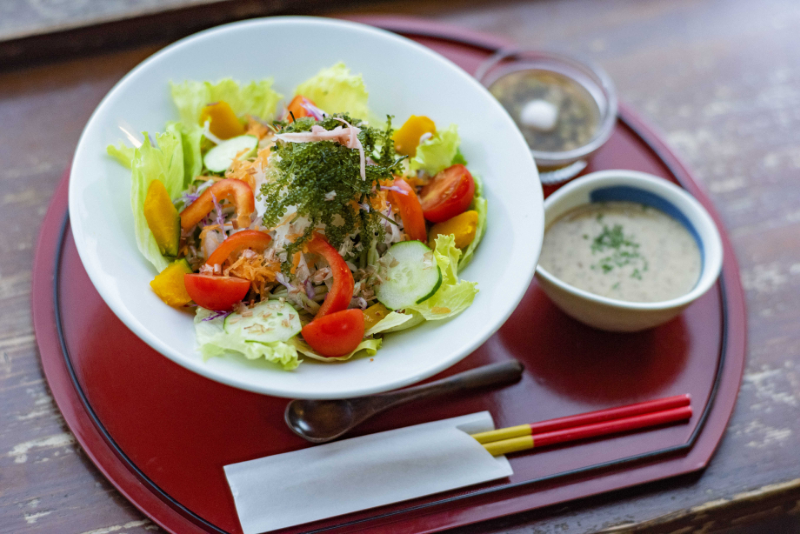 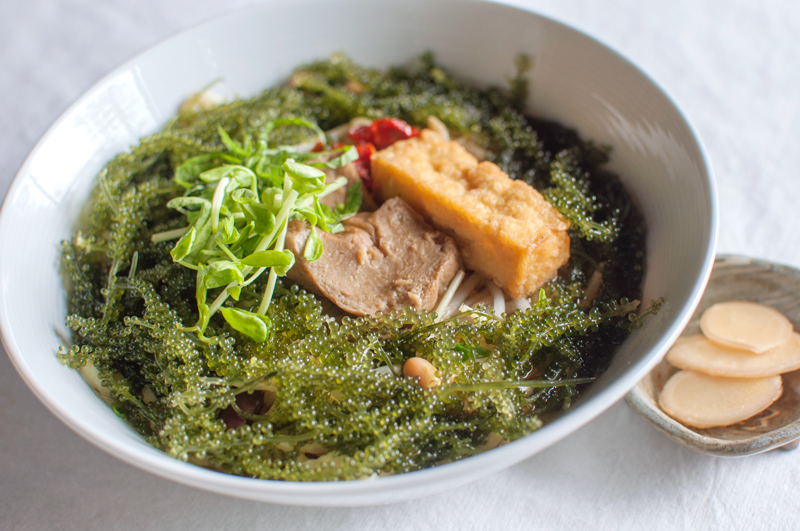 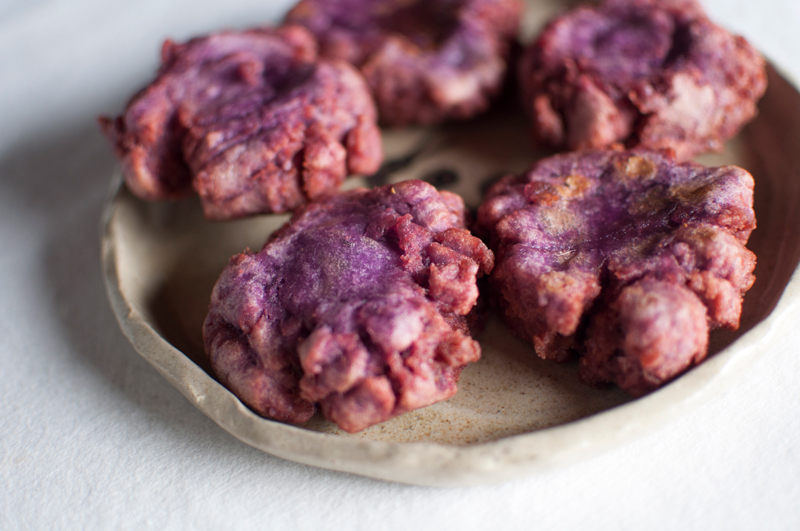 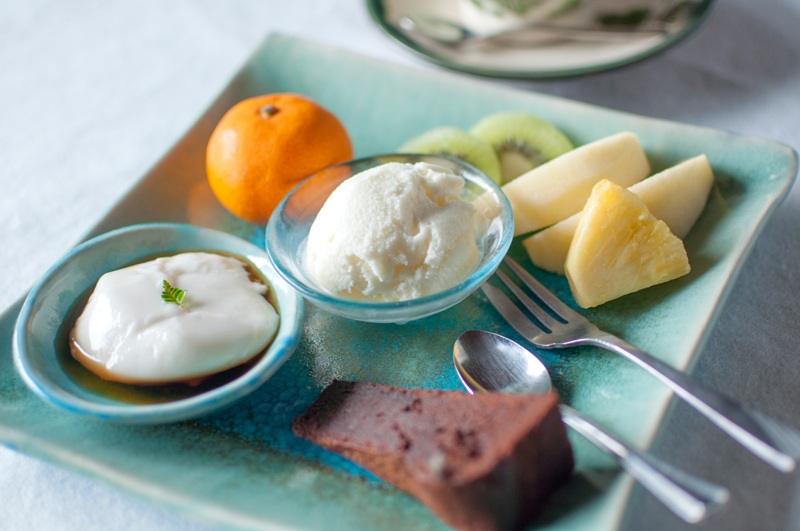 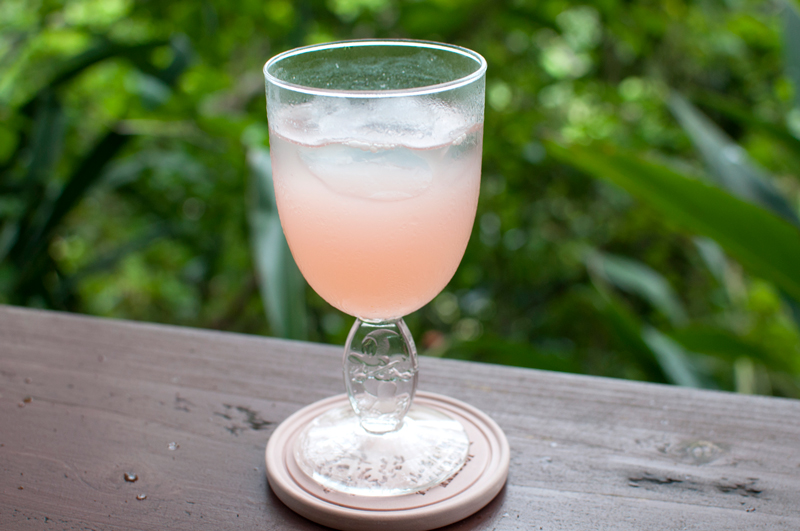 ＊We give a ¥100 discount for adove drinks with ordered with pizza.

※The prices above do not include tax. 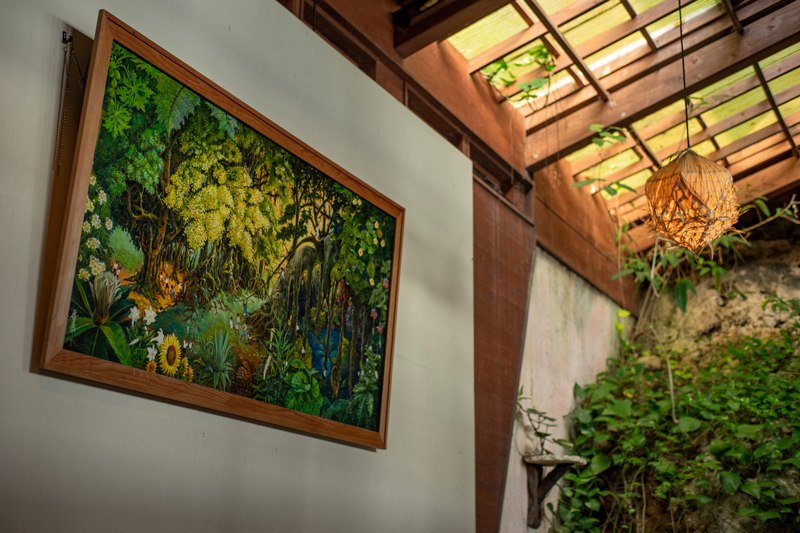 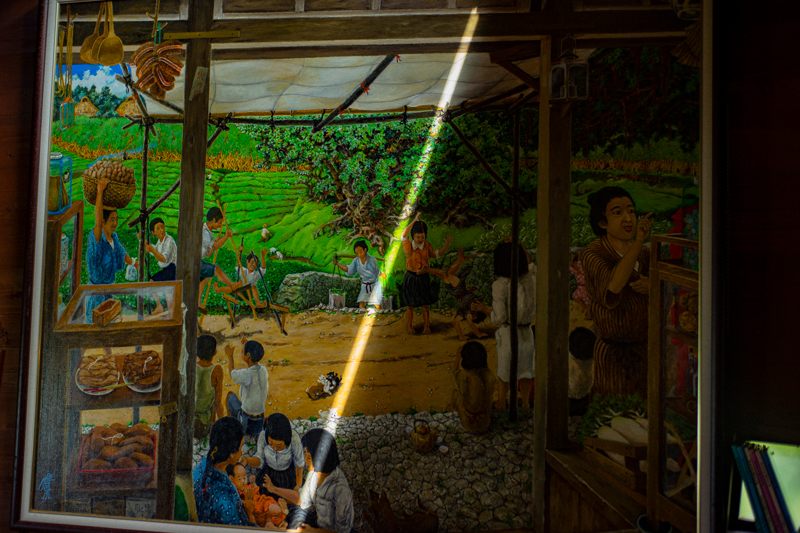 In Yama no Chaya Rakusui, there is the original painting ‘Natsukashii Mirai Okinawa (Nostalgic Future Okinawa)’ on display painted by Yuichi Nozu, an artist who loved Okinawa. It shows the landscape of the original state of Okinawa in the old days. In other words, It shows the scenery of the lifestyle in Okinawa before the war that fewer and fewer people know about today. Nozu’s work, which was painted relying on his memory, expresses the vivid faces and warmth of Okinawans. 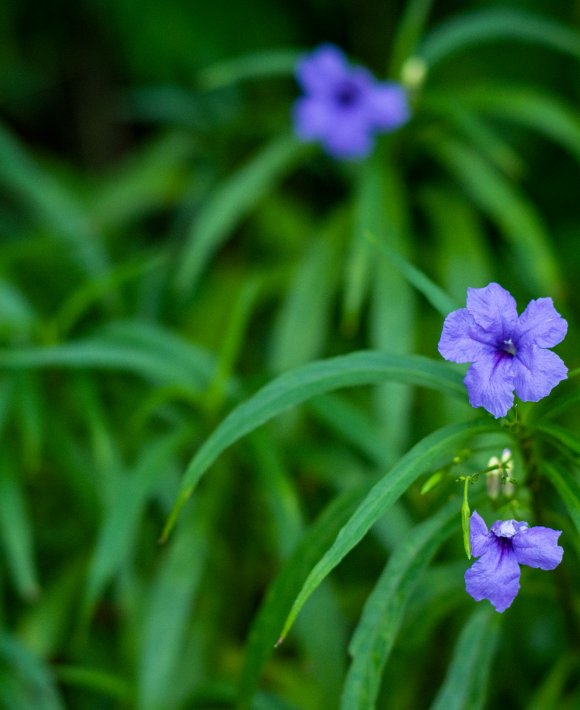 “ The place restored in those way was just like a cultivated field. In that field, his wife Yoneko sowed seeds that bloomed into lovely, little flowers all around. I then came to gaze at those flowers. It’s romantic, isn’t it? ”

“ We fought often. However, because we could reach our hands out to each other, we were able to make it this far. A flower without a name bloomed. A two-ring flower happens to bud by the roadside and thanks to everyone it happens to bloom, to lighten everyone’s heart, to give everyone happiness. I worked hard to do what I love. I was so serious everyday you could almost say I devoted myself. I could continue doing it because I loved it. Not only that. I worked hard. The customers came to recognize what I have shaped with imagining the time I wanted to spend and the scene I wanted to be on.

When Hamabe no Chaya became popular, I began to think ‘after coffee, I want a place for eating.’ Then I came up with Yama no Chaya. I thoroughly thought about what Yama no Chaya could offer. Okinawan ingredients, Okinawan food. Based on mother’s cooking. I am not a professional chef, so I decided to do what my Okinawa-born mother would do. My son as well as the young staff are working hard instead of me now.

My husband Nobuyoshi is an artist in a sense, therefore I needed to support the management. Making the store is his job. Managing the store is my job. I have supported his work from a realistic point of view. People often say his work was too reckless, but I also shared the feeling towards the concept ‘to make a space to heal people with the help of nature’. That is why even I have been able to continue supporting him. I cannot do anything great, but my feeling of wanting to create something like paradise, even if it is small, cannot be overcome by his feeling.” 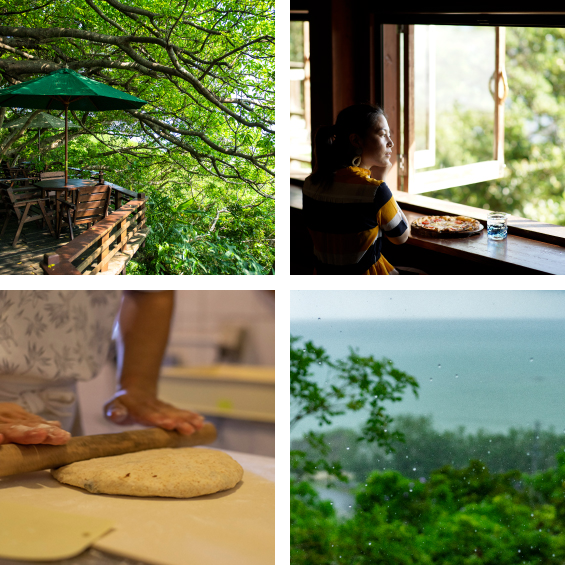 When asked if I like the ocean or the mountain, answering honestly troubles me. I cannot decide between them. Besides, I like both. When I first went to Hamabe no Chaya, my chest filled with excitement. If it was a weekday, it wouldn’t be as crowded as it is now. I aimed to step in right after the store opened. Every time I go, and the store returns quiet inside, I get lost in thoughts while staring at the ocean. After building Yama no Chaya, I went to either Hamabe no Chaya or Yama no Chaya based on the tide’s condition. Even now when I come to Okinawa, I go back and forth daily.

In Okinawa, there are various cafes being made here and there and lots of stores that have tasty, special coffee, but this is a place I cannot abandon after all. I can be in the forest, moreover, can overlook the ocean. Of course, sunny days are great, but to choose between the two, I like rainy days. The feeling of ennui is rare with the drawn gradation of moist green, blue-gray ocean and dark gray rain clouds spreading beyond. The feeling of being hugged by Okinawa’s nature is close to the comfortable feeling of my mom holding me to her chest as a child. 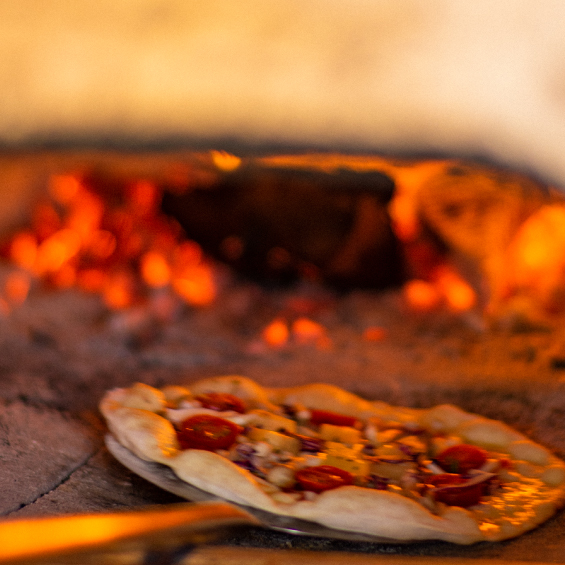 I love the location and the view, but I can also taste the stone kettle cooked pizza, home cooked Okinawan food, rustic warmth and feeling of coming to play at grandma’s house. There are many vegetables cultivated by the staff and neighbors. When they can’t get those, it seems they go to the local vegetable vendor. Oh yes, pizza is baked in the kettle oven with homemade yeast which is also used in Hamabe no Chaya’s campagne sandwiches. Firewood from the roadside wilderness is selected and used for baking. That style of doing things is good, too.

In the café, there are many dynasty period paintings of Okinawan lifestyle in the good, old days decorating the wall and large, bare Ryukyu limestone to give you a taste of extraordinary life. I often use the terrace seats outside under the shade of greenery to read and write postcards. Although it may not be flashy, I think the goodness of this place is something like the hospitality of the casual, lovely flowers that bloom in the field.
I have heard the owner’s, Mr. Inafuku, story before about the bank opposing the building of Yama no Chaya. “Why build a second store so close to Hamabe no Chaya,” they said. However, when surveying the area, he found large, old gajumaru trees and a huge Ryukyu limestone mass. ‘More than 70% of it was buried in dirt like an iceberg,’ he noticed with a hunch. When you open the door to the hallway and enter, there is a large stone in front. That wild, bare Ryukyu limestone is the stone Mr. Inafuku found that time. He said when surveying, that’s when he decided to build the next store after Hamabe no Chaya.

However, the planned area is a steep climb from the road below. That is why the customers need to climb a long stairway. Not only the bank, but his father also opposed. ‘No one will want to climb 100 steps to come drink tea,’ he said. It took a long time to persuade and fundraise until construction started, and it took ample time and money for the 100 steps. “I don’t want to use concrete.” he said. He made it all with Ryukyu limestone. “You are crazy,” all around him said.

”Why did you go that far?” I asked. “My past life was probably a stonemason,” he said. “I wanted to leave the skills of Okinawa’s masonry to future generations.” He also said, “I decided to do it when I encountered the land myself. Because that slope is there, I conceived the staircase. Thinking of it now, it was reckless. It was unreasonable. It’s because I was in my late 40s. Eventually, restoration took two years. It was only able to be done, because two experienced local stonemasons were there for me. It was good timing since the restoration of Shuri Castle had just finished. Everything was meeting and timing.

The scope was small, but we were able to create an atmosphere like castle ruins. I especially minded the way the curves came out. I also was stuck on the large landing area right in the middle of the stairs. There is a large area and where you would use a cut limestone, we used the whole dug up limestone. The major premise of this place is the use of the trees originally growing here and wanting to make a staircase corresponding to that. I was committed to a place that makes you forget the tiredness in your feet, climb up 50 steps to a landing area with good atmosphere and go further up to a lovely place spoken to you by the stones.”

Once Mr. Inafuku started speaking, he didn’t stop talking about this. Location, building, a way to get there. Everything is a piece of work and he spoke feverishly. The place restored in those way was just like a cultivated field. In that field, his wife Yoneko sowed seeds that bloomed into lovely, little flowers all around. I then came to gaze at those flowers. It’s romantic, isn’t it?