Once God Came Down, It All Began

It was long, long ago before there was even one human alive in this world. One day, the direction of the wind turned north and as time passed, a god felt the feeling of being invited by something and made way down to this island. Looking down at the ground from a cloud in the eastern sky, the god’s eyes stopped at the ocean, which was colored by a gradient of deep Prussian to lapis blue to dayflower violet to countless more colors. The island surrounded by that breathtaking ocean looked like a seahorse swaying back and forth in the water. Clang. What fell was finely broken coral made into a beach. Before reaching the zenith, the beach basked in diagonally falling sunlight and magnificently sparkled. When looking toward the hills, the god’s face peered through at a jagged, steep rock between dark, green trees.

As the god slowly approached closer, he noticed the gushing of pure, clean water and scooped it into his hands careful not to spill. “It has been tens of thousands of years since my birth, yet I have never tasted water as good as this”. He smiled in satisfaction and continued to moisten his throat many times with the sweetly scented, gushing water. His stomach became plenty full. Beside him was a perfectly sized cave so he decided to rest for a while and lied down. Tired from traveling, he soon fell asleep and saw many strange dreams.

After a while, the god’s eyes opened to birds singing and soon forgot what kind of dream he had. He headed towards the outside of the cave and let out a ‘haa’ while taking a long stretch. “What is this?” He yelled without thinking. At his feet were a lineup of many unusual fruits he had never seen before. Animals who heard the god’s voice came out of the forest and gathered one by one. “God, we have been waiting for you. There are friends of ours in the north looking for help. Please come with us to help them.” It was such a sudden request, but the god could not just leave them, so while rubbing his eyes he walked in the direction the animals led him.

An Odd Couple Refine the Land

The blessing of rain falls from the heavens to moisten the land and flows into small lines forming a river. Little by little, time flows like a river pouring through a long road between mountain and sea. Tens of thousands of year pass to near the end of the 20th century. An odd couple begins to build a café on the island. “Even if a café is built in this kind of place, it is not as though any customers will come.” Around the couple people would laugh, but the two did not listen to their voices and silently prepared the soil, piled stones, stood pillars and finally the beachfront café was finished.

Afterwards, the couple thought about building another café. “That couple must be crazy to build something like another café near here.” Again, people began to whisper. However, since the first café was very prosperous, people only said bad things behind their back. On a small mountain overlooking the beachfront café were trees, herbs and flowers growing lusciously with the same roots from when the island was born. The mountain is originally where the couple’s ancestors settled. Although, when the land was taken during a great war and people could no longer live there, before one knew it, the land once covered in greenery turned into an abandoned wasteland.

“I want to make this a place for people to gather like in the past.” The couple finally completed the second café. A splendid, stone-made staircase, like from the castle from the Kingdom period, continues from the seaside to the café. On both sides of the staircase are the proud blossoming of seasonal flowers, singing of birds and dancing butterflies. After some time, the couple made a lovely garden above the second café. Indeed, no one was able to say anything this time. The finished garden was named ‘Happiness Field’.

On a sunny, winter day, the couple enjoyed 3 o’clock tea under a large gajumaru tree. After finishing much work that day, they felt a sigh of relief. The two calmly gazed at the southern sky and, even though it was still bright out, could softly see comets shooting into the east. 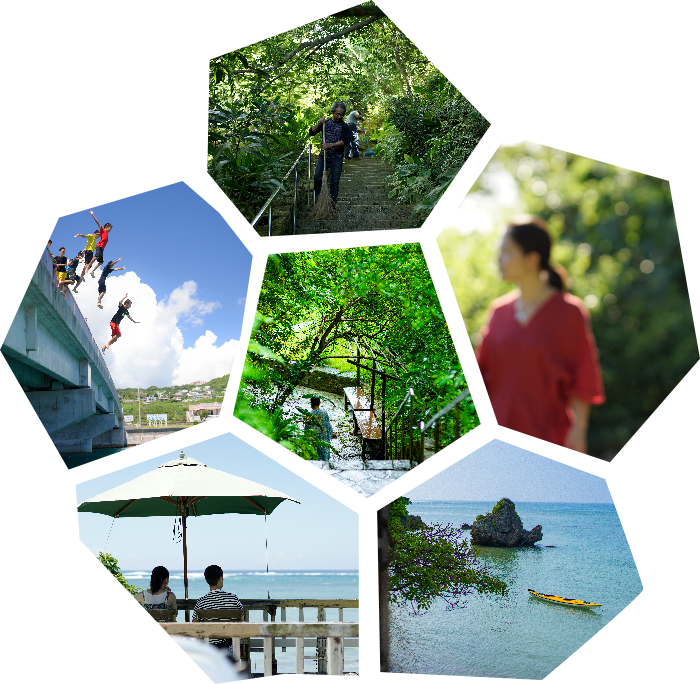 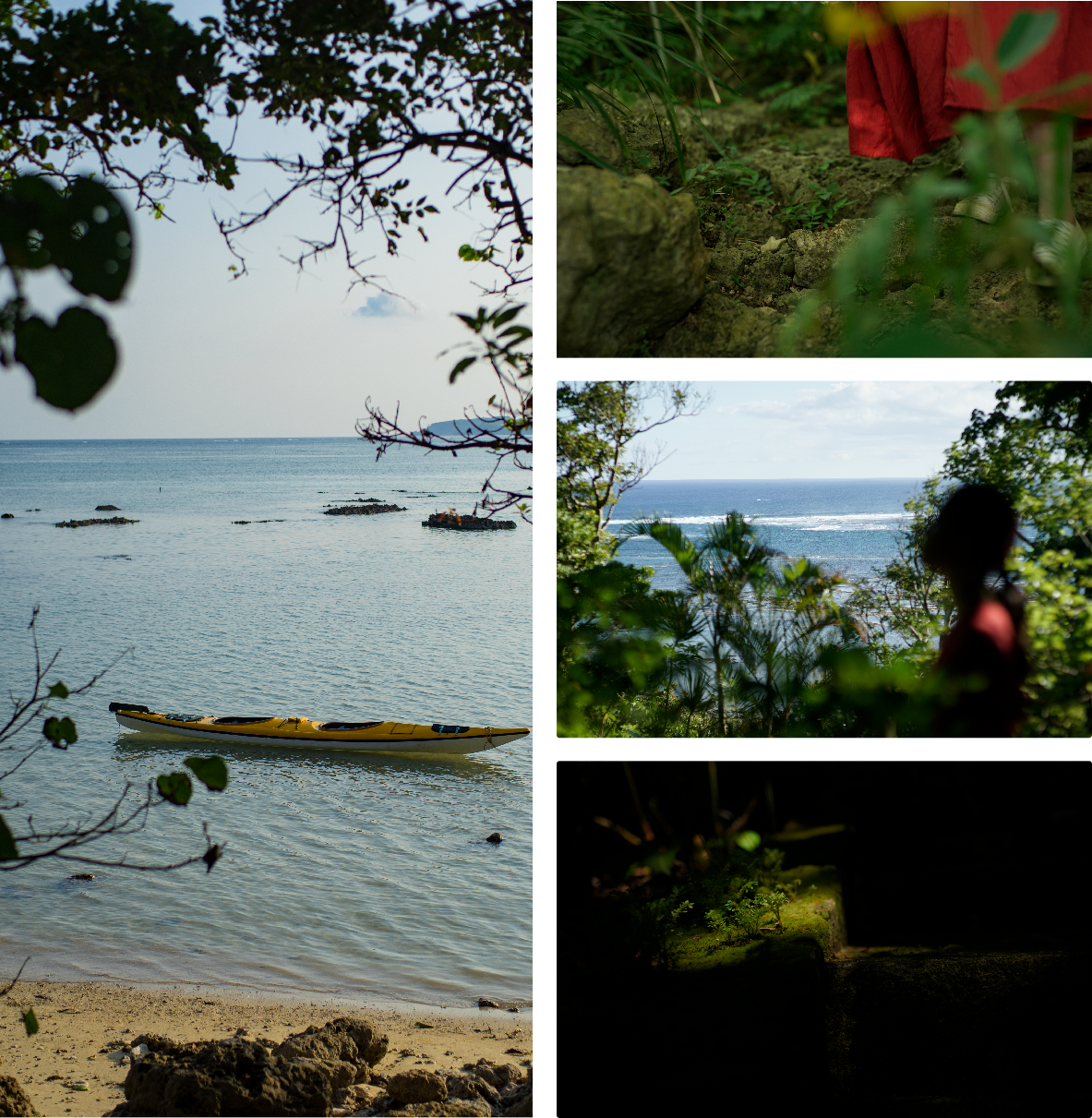 A woman lying down in the grass with a white dog below the gajumaru tree listened to birds chirping. As usual, the couple tends the garden and calls out to the person who starts to talk about themselves in a crystal-clear voice. It seems this traveler came from a country in the north. The woman with clear skin like snow was invited by the cheer of the southern island and finally arrived here a week ago. The colors reflected in her eyes, sounds flowing in her ears, soft feelings in her hands, tickling smells in her nose, all experiences of senses she has never encountered before made her immediately captivated by the island.

The woman spent the night in a cottage that was built in the garden. While absorbed listening to the symphony played by the insects outside with the window left open, she quickly fell asleep. The night was late. A god with long hair came down from the heavens to speak to the woman, but she was deep in the middle of a dream. Then, for some reason, the woman awakened. When she got up from the bed, the window was illuminated by moonlight and shining pale and bright. She felt invited to go out to the balcony and looked up at the sky to witness two, three, four shooting stars disappearing into the west. “What is this? An illusion I wonder.” Once she muttered this, she pet and calmed the dog who would not part from her feet and returned to bed again.

“Haw, haw, haw” The woman was woken by unfamiliar callings of birds and decided since she was here, she would take her white dog on a walk to the beach. go for a walk to the beach with her white dog. As she went down the stairs made of stone, the tide was coming in close to a chair placed on the beach. A little further down the ford was a middle-aged man throwing a net. “Looks just like a hunter above water.” The woman said to the dog. The dog turned towards its owner and slightly tilted its head. In order to not be noticed by the fish, the man walked on his tiptoes towards the black shadow, calculated the timing and threw out the net. While pulling in the net he let out a strange sound. That man was a part of the couple who called out to her when she was sleeping in the grass yesterday.

While entranced in staring, a small fish smoothly escaped from the net the man was holding. “Children escape for tomorrow.” The man prefers using a net with large holes in the web for young fish to escape. The fish caught on that day were spotted herring and hardyhead silverside. The man told the woman the fish are fried and eaten or used as ingredients for fish sauce. “Man can live thanks to fish. Equally so, too.” The man returned to the beach and met near a calico cat. “I team up with this cat, so I always catch big fish.” Being satisfied with catch to fill just one bucket is the style of this island he said last and made his way up the stairs with the cat. 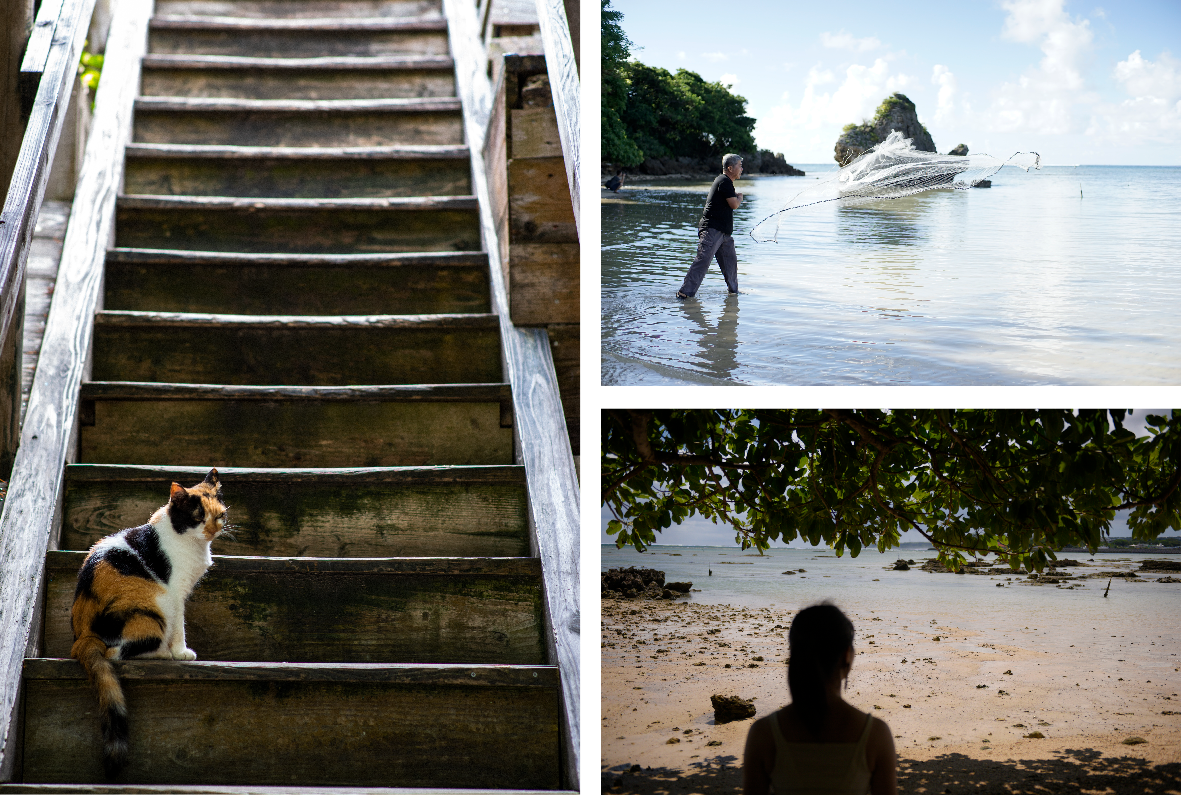